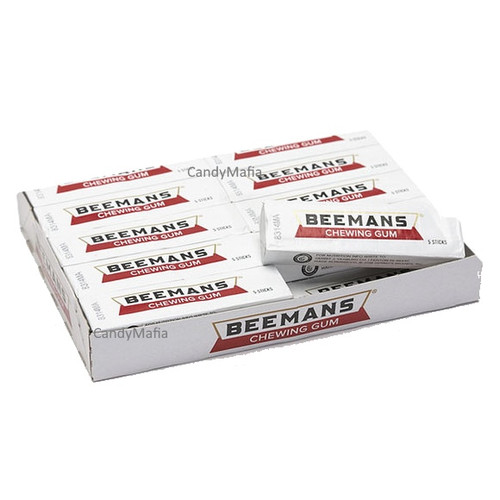 Beeman's Classic Chewing Gum
20 packs - 5 sticks in each pack
Beeman's Classic Chewing gum is back!  This is a very hard to find flavor of gum, but here it is!  You will receive a total of 20 packs of Beeman's Gum with 5 sticks in each pack of gum for a total of 100 pieces.
Beeman's Gum has been discontinued for years, and was just brought back in 2019!  Read the crazy history at the bottom.
Thanks again for loving gum and candy!
CandyMafia.com
The History of Beeman's Gum from Wikipedia

Beeman originally marketed the gum, which is made of pepsin powder and chicle, as an aid to digestion. It became a part of the American Chicle Company in 1898, and continued on after the purchase of American Chicle by Warner-Lambert in 1962. Production ceased in 1978 due to lagging sales. In 1985, as part of a nostalgia campaign, it was brought back to the market along with Clove and Black Jack chewing gums.

The original wrapper had a pig logo, but was later replaced with a logo featuring the Beeman's name in scroll and a picture of Dr. Beeman. The current wrapper design has a white and red background with white and black lettering. Beemans is sporadically produced by Cadbury Adams as a nostalgia gum, along with the other historic gums Clove and Black Jack. Since then, because of regular demand, all three brands have been introduced with huge popularity. In 2015 the company announced it would no longer produce any of these popular gums. The gum is sold sporadically in the USA by the Gerrit J. Verdburg Co.

The gum is prominently featured in major movies The Right Stuff, Hot Shots!, The Rocketeer (in which the gum serves a key plot element), and Indiana Jones and the Kingdom of the Crystal Skull, used in the latter for character Mutt Williams (Shia Labeouf) in Indy home scene. Most recently the gum features on the inventor's workbench of young Frank Walker in Disney's Tomorrowland, as Frank is working on his homemade rocket jet-pack.

While it has been considered the "lucky" gum of pilots, Beemans in fact became popular with aviators due to the antacid qualities of pepsin, useful due to the agitation of stomach acid in flight. This, combined with the ear-pressure equalizing characteristics of chewing any type of gum, made Beemans a common sight in cockpits. The sporadic availability has led some aviators to buy it by the carton whenever possible.

Gerrit J. Verberg Company then acquired the rights to produce Beeman's Gum in 2018.