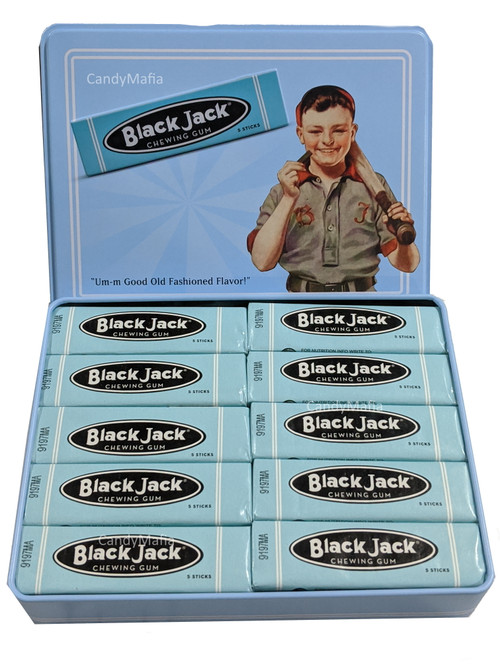 Black Jack Classic Licorice Gum
10 packs - 5 sticks in each pack
Vintage Collector Tin
Black Jack Classic Licorice gum is back!  This is a very hard to find flavor of gum, but here it is!  You will receive a total of 10 packs of Black Jack Gum with 5 sticks in each pack of gum for a total of 50 pieces.
This Vintage Collector Tin is actually a metal tin with a matte finish and the image of the gum embossed on the front.  It is a fantastic gift idea and a very retro package.  The tin actually includes 10 packs of gum, and it is a great place to store future packs of gum.
Black Jack has been discontinued for years, and was just brought back in 2019!  Read the crazy history at the bottom.
Thanks again for loving gum and candy!
CandyMafia.com
The History of Black Jack Gum from Wikipedia

Black Jack is an aniseed-flavored chewing gum made by Mondelēz International, originally the American Chicle Company. As of July 2018 Gerrit's Brands, Inc. acquired the rights to Black Jack gum, along with Beemans and Clove, relaunching reformulated versions in November 2018, without the original natural flavors.

He brought a ton of Mexican chicle with him, in hopes of selling it to raise funds to help him return to power in his own country. He persuaded Thomas Adams of Staten Island, New York to buy it. Adams, a photographer and inventor, intended to vulcanize the chicle for use as a rubber substitute. Adams' efforts at vulcanization failed, but he noticed that Santa Anna liked to chew the chicle, which the ancient Mayans had done.

Disappointed with the rubber experiments, Adams boiled a small batch of chicle in his kitchen to create a chewing gum. He gave some to a local store to see if people would buy it; they did and he began production.

In 1871, Adams received a patent on a gum-making machine and began mass-producing chicle-based gum. His first product ("Snapping and Stretching") was pure chicle with no flavoring, but sold well enough to encourage Adams in his plans. He began to experiment with flavorings, beginning with sarsaparilla. In 1884, he began adding licorice flavoring and called his invention Adams' Black Jack, the first flavored gum in the U.S. It was also the first gum to be offered in sticks.

Black Jack Gum was sold well into the 1970s, when production ceased due to slow sales. It was re-introduced in October of 1986.  American Chicle was purchased by the Warner-Lambert Company in 1962, which became part of Pfizer in 2000. In 2002, Adams was purchased by Cadbury, which merged with Kraft Foods in 2010 and became part of Mondelēz in 2012 following the split, and was later discontinued.