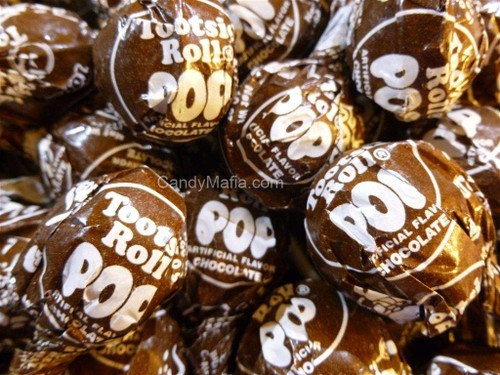 They are all individually sorted and packed in a clear, heat sealed bag for freshness.

Now you only get the ones that you really want, the Chocolate Tootsie Pops!

What happens if I have an Indian shooting a star on my wrapper?
Did I win?!

At some point, a rumor began that wrappers with the "Indian star" (an image of a child dressed as a Native American aiming a bow and arrow at a star) were redeemable for free candy. Some stores redeemed lollipop wrappers with the child aiming a bow for a free sucker. This was clearly up to the store owner, and not driven by the lollipop manufacturer.   Another legend is that the same wrapper gives you good luck for the rest of the day.

Another urban legand is that the lollipop wrappers which bore three unbroken circles were redeemable for free candy or even free items like shirts and other items. The rumor was untrue, but some shops have honored the wrapper offer over the years, allowing people to "win" a free pop.

Thanks again for loving Tootsie Pops!  If you have any questions, please contact us!
(Except for: "How many licks does it take to get the to center of a Tootsie Pop"
We need YOU to find out...and then tell us.  :)
Thanks again!
CandyMafia