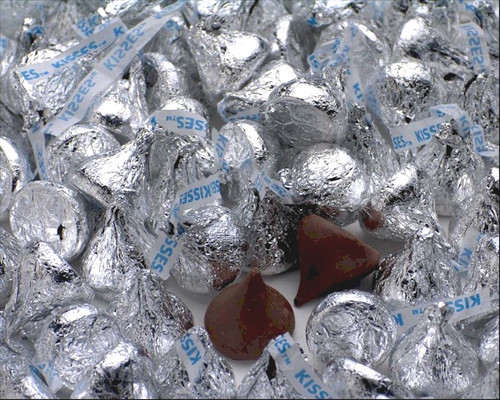 Hershey's Kisses are your favorite little chocolates, dressed to impress in their little silver foil wrappers!  With their signature, flat bottomed shape, and the little flag that pokes out of the top, they have been everyone's favorite kiss for years!

They are perfect for weddings, birthday's, office bowls, but wherever you put them, they will be eaten!  These are only going to be out for a limited time because they do not like the summer.  Stock up while you can!

The 2 pound bulk will have over 200 Hershey's Kisses.  If you have any questions, about them, please ask!

Why do Hershey's Kisses have the little flag on them?

Hershey's website didn't have an answer, so we found one on Wikipedia.Wikipedia says that it's a brand thing. It was to show the purchaser/consumer that the chocolate was genuine Hershey's chocolate.

See the quote below.

"The candies were originally wrapped by hand. Automated wrapping began in 1921. The same automatic wrapping process allowed for the insertion of the distinctive paper "plume," that the company used to guarantee that consumers were getting the genuine Hershey product, rather than an imitation. This thin paper strip was registered as a company trademark in 1924." What Wikipedia calls the "plume," Hershey's calls the "flag" or "plume." BTW, did you know that the streetlights in Hershey, Pennsylvania, the home of Hershey Chocolate, are shaped like Hershey 's Kisses? Some are brown, like the Kiss itself, and some are silver, like the wrapped Kiss. The wrapped ones even have the flag. Also, Kisses have been around since 1907, so you're not the only one who loves them.  :)