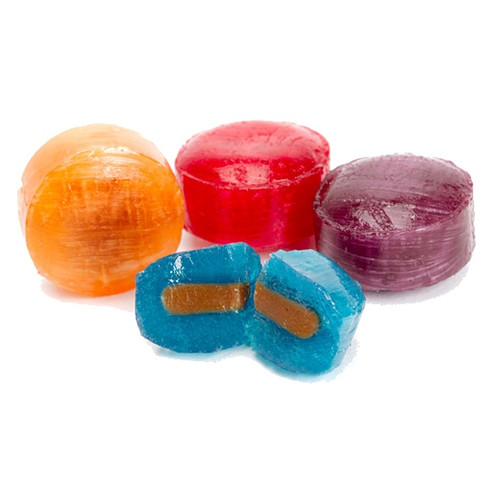 Tootsie Pops without the stick!

Tootsie Pop Drops are your favorite Tootsie Pop suckers without the stick!  Tootsie Pop Drops are much smaller than a regular Tootsie Pop.  Each one is approximately the same size as a Mento, or a Peanut M&M.  There are 10 packets in this bag, and each packet has 16 Tootsie Pop Drops in it.  It has the hard candy shell around it, but you can actually bite right through it if you want...or if you're impatient.  :)  Then there is the delicious Tootsie Roll Center in the middle!  There are 16 Drops in each packet, and they are unwrapped.  The flavors are actually interesting because they have all of the traditional Tootsie Flavors, but instead of Red Raspberry, they substituted Blue Raspberry.

Here are the flavors that are included:

Cherry
Chocolate
Orange
Grape
Blue Raspberry
The Tootsie Pop Drops are a great way to enjoy your Tootsie Pops without having the stick!  And for those of you who don't have the patience to see "How many licks does it take", now you don't have to wait!  :)  Give them a try!
Thanks again for loving Tootsies!
CandyMafia