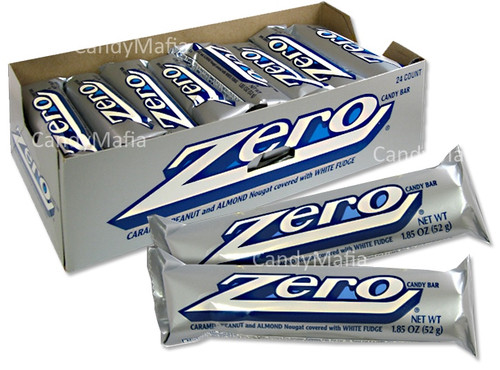 Zero Bars are the delicious candy bars that are Caramel, Peanut, and Almond Nougat that is covered in White Fudge.  These are the regular sized bars that are 1.85oz and there are 24 Zero Bars in each box.  The candy bar is white in color, which is strange for a candy bar, and that has become it's trademark. Here's the fun history of the Zero Bars.  Enjoy!

ZERO was first launched by the Hollywood Brands candy company of Minneapolis, Minnesota, in 1920 as the Double Zero Bar and was renamed "ZERO" in 1934. It is said the name "double" zero was implied to suggest the zero bar was "cool", as in low in temperature. Initial manufacturing of the candy bar began at its factory in Centralia, Illinois, and continued through many acquisitions of the company.

Hollywood Brands was first sold to Consolidated Foods Corporation in 1967 (which later became Sara Lee) and production continued after a fire destroyed the Centralia plant in 1980. A new production facility opened in 1983, and in 1988 Hollywood Brands was purchased by Huhtamaki Oy of Helsinki, Finland and became part of Leaf, Inc.

Hershey Foods Corporation took over Leaf North America confectionery operations in 1996, and with it came the production of the ZERO candy bar.